We have declared two runners for Boxing Day with Bluenose Belle going to Wolverhampton in the mile and a half handicap and Alright Chap in the bumper at Huntingdon.  Jonny Peate rides Bluenose Belle claiming five pounds and she will wear cheek pieces.

She ran with credit last time out considering she had to make the running and will hopefully put up a good show on Monday.

Alright Chap runs in a competitive bumper at Huntingdon, however the ground should ride on the good to soft side which will be better than at other tracks at present.  He will be making his debut and has shown promise at home but the opposition look pretty strong and we look forward to him coming on for the experience.

Unfortunately the ground will not be soft enough for Rossbeigh Strand and we will have to look for another option for him as he does prefer softer ground.

With rain this morning we postponed our Christmas jumper morning until tomorrow, when hopefully the weather will be kinder.  However we did have our ‘secret santa’ at breakfast time and thanks to my new book – I am now able to swear in various languages so thank you santa! 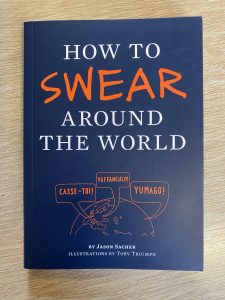