Two runners today with Muthabir in the 3.10pm at Kempton and Madame Ritz in the 6.30pm at Chelmsford.  Muthabir won this race two years ago off a similar mark but he is slightly longer in the tooth these days and this is a competitive event.  However it will be a good starting point for him on his first run for the Adlestrop Club and I’m sure he will give the Club some fun this season.

Madame Ritz steps up to seven furlongs at Chelmsford as she was outpaced last time at Southwell.  On some of her runs she has looked like a step up in trip would suit and it will be interesting to see how she gets on with Joe Fanning onboard.

Joe rode Golden Deal at Wolverhampton on Saturday evening and found that she pulled too hard from the front and in hindsight, probably should have dropped her in a bit to get her settled first.  Hopefully we can find another race soon and return to the tactics that led to her running so well at Lingfield and Chelmsford.

It was great to be at Ascot on Saturday to see some great racing.  Thanks to the generosity of Bob and Pauline Scott and Adrian and Julia Powell, we had lunch with the other members of the G.O.D.S syndicate who lease Pop Mistress.  She is a promising three-year-old out of winning hurdler and chaser Mayolynn and this daughter of Sixties Icon will hopefully be starting out in a bumper before going hurdling.

She has pleased us this autumn although she may need a little bit more time but she looks like a winner in the making for the syndicate.  Among the syndicate is Cotswold racing legend Mick Barnes who despite backing three losers, had a fantastic day dressed as a mafia don. 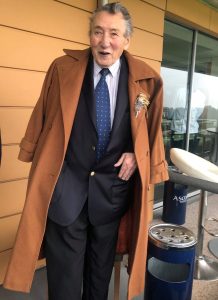