Off to Wolverhampton today for the 1.30pm with Madame Ritz.  She is a course and distance winner but has been off the track for a year thanks to a split pastern.  Hopefully she will run well despite this and Jane Elliott takes the ride claiming three pounds.

Her owners The Firebirds have been very patient and let’s hope there are more victories to be had with her.

Returned from a very enjoyable Goodwood and as ever, it was fantastic racing with some great stories.  International racing was given a boost with Japan’s Deirdre winning the Group 1 yesterday and diversity in racing given a boost with Khadijah Mellah winning the Magnolia Cup – which also gave a lift to the wonder Ebony Riding Club and hopefully this will inspire many more to get involved with the sport.

Thankfully there is huge diversity in racing already and it should be remembered that not only owners but many stable staff are from all parts of the world – with some of the best on the flat and National Hunt being looked after by Indian grooms including Frankel, Sprinter Sacre and Too Darn Hot.

To witness all that is good were many from the political world including former chancellor George Osborne, who with his son looked in awe at Stradivarius in the winners enclosure.   As I pointed out, he and the horse had something in common in that they both ‘Set the Standard.’

Great to watch the first race on Wednesday with Sir Mark Prescott.  His winner, Timoshenko only just got up in the final furlong thus Luke Morris avoided a possible rollocking from his boss.  Well done to the trainer who asked Sir Mark before the race if he thought his horse would go well – to which his reply was “Well he has won his last five, is off bottom weight and it’s no accident my boy.”

I am sure many will be pleased to know that Mick Barnes returned safely from his trip from the Sussex track.  He did not enjoy yours truly winning this years annual crazy golf championship – defeating owner Vince O’Brien by one shot on the last.

Last year’s winner Charlie Allan had a nightmare towards the end of the round and had a remarkable eight shots off the tee at the ninth.  The claret mug has been proudly returned to Adlestrop. 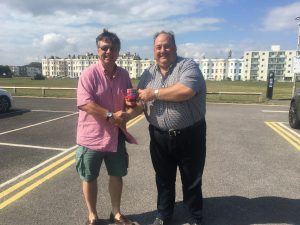