Most of the string are now going on their holidays but we do have a few to run over the summer.  With Iron Horse likely to go up in the handicap, we are considering running him with a penalty next week.

We have Golden Deal in at Lingfield on Saturday – she worked nicely this morning and looks on course.

Pleased with our purchases from Doncaster last week.  Islandray, a five-year-old by Milan won a point to point in Ireland last time out and has been purchased by Carbine Of London Racing.  The syndicate have two horses, one on the flat with George Baker and now Islandray who will hopefully give them some success and fun over the next couple of seasons.

The syndicate is full of some great racing characters so let us hope Islandray proves to be a shrewd purchase.

We also came back from Doncaster with Methodtothemagic, (pictured) a four-year-old mare by Sans Frontiere who has been placed in a couple of point to points and is half sister to a useful chaser in Crazy Jack.

The form of her races has worked out well and we are in the process of syndicating her and she looks great value. 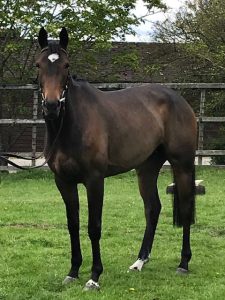